It has been a busy couple of weeks here at the Scriptographer HQ, as we were adding new features and writing tutorials, squashing bugs, simplifying things further and also adding support for the new Illustrator CS5.

We are quite excited about the mixture of new things, simplifications and more stability that we added to this release and think it was well worth the wait.

Refer to the change-log for a more complete list of what is new, but here some of the highlights:

We introduced a new way to organise your scripts that is far more flexible and also more secure, as it prevents you from accidentally overriding your own script files: The Scriptographer Repository Manager lets you define multiple script repositories that serve as root folders for your scripts. These root folders show up in the Scriptographer Main Palette as if they were all nested together in one parent folder, but in fact they can be located anywhere on your hard-drive, and really should be located outside of the Scriptographer folder. In the future this will allow far simpler updates of Scriptographer to new versions, without the risk of any changes to your scripts lost – that is as long as you do not store your changes inside the default Examples folder.

Here is how it looks like with my personal configuration of multiple projects done with Scriptographer, all located in different parts of my harddrive: 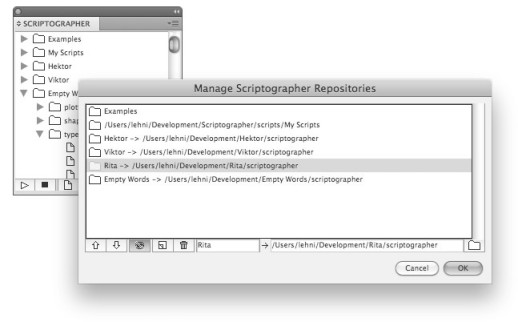 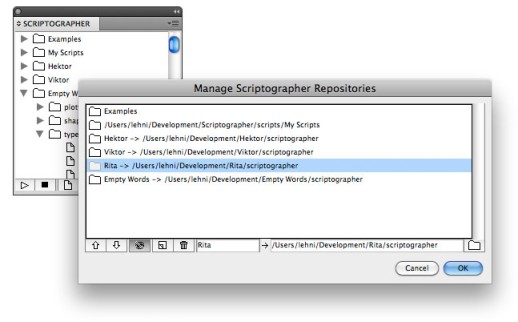 We also spent a lot of time thinking about how the already great new Palette class could be made even more useful, simple and flexible. And we believe we came up with some really great ideas that we are soon going to write more about in the tutorial about Displaying Dialog Windows. We also changed many of the example scripts in the Tools folder to use this powerful new feature, so until the tutorials are done, the best way to see how to use it is to look at these scripts.

Components in palettes now support a couple of new values for component.type: 'font', 'color', 'ruler', 'menu-entry' and 'menu-separator'. But what's even better: If a script changes properties in the values object that is passed to palettes on creation, the palette gets updated automatically and efficiently. In the same way, the components object that is passed to the it now offers simpe access to the created Components, allowing the components to be disabled and enabled again, hidden and shown, list options can be changed, etc.

From this release on, the classes previously available through the UI package are now deprecated. The reason for this is that the technology they are based on (ADM) will go away in CS6 when Illustrator will be ported to Cocoa.
In order to prepare for this transition early, and also to simplify the way people work with Scriptographer, we decided to come up with this new way of making UI in Illustrator that we believe is very powerful and incredibly easy. The only classes you need to know of are Palette, Component and Dialog.
Documentation for the previous UI package, now dubbed ADM, is still available at http://scriptographer.org/legacy/adm/.

Lastly we would like to highlight a feature that might produce a whole new category of scripts: In this release, timers finally became reliable, much faster and stable, allowing them to be used to write background scripts that can continuously change items in the document. This can for example be used for animations, or other playful things, such as the new Throw.js script in the Examples folder. Timers are currently not documented in the reference, but you can use them in the same way as you would in browsers: setInterval() / setTimeout() to set a periodic / one-shot timer, and clearTimeout() / clearTimeout() to abort them again.

This should give a good overview of what is new. We are aware that a lot of things still need better documentation and will now again focus on that part.

We hope you will have as much fun with this release as we had making it.

So that's about it for now from us, time to download and start writing your own scripts!

Just when I had written my script you go and change the whole game around!

Haven't had time to play around with it yet but the new component thingy seems to be of great use. I have just been working on a very ugly workaround for just that particular function.
Now all I have to do is re-write my entire script...

All the new Palette stuff is also a very welcome addition!

This is a great update, thank you!

Håkan, apologies for the bad timing! That's why we warned people ahead of time of the upcoming change. It wasn't so much us who changed the game though, it is Adobe at whose stake we are in the end... And they needed to find a solution for the upcoming architectural change and unfortunately decided to dump ADM instead of writing Cococa wrappers for it. But the good news is that no more such fundamental changes are planned now. Except for if Adobe decides to rewrite the whole of Illustrator, but I highly doubt that.

The work that went into this was quite substantial, the visual result rather minimal for now, but we believe over time this will really show in the scripts.

Your current script should still work without any changes for quite a while though. We are aware of a newly introduced problem that currently breaks many of the scripts that use the previous approach to UI but are going to fix that ASAP. So no need to immediately change it all again, except for if you want to learn the way of course.

Everything I had written was with the "safe" palettes. But now there are added features which would, thank God, make my ugly workarounds obsolete. So I am more than thankful. Only thing though, now I have to learn all this new stuff which should be fun but it has made my social life kind of suffering.

I have come really far with my latest script, and I have, in my eyes, come a long way, but it seems I have now hit a snag. Just posted a thread about it on the forum.

Thanks again for your commitment to your project. It sure gives me alot of satisfaction!

Haha, yes that's for sure: Social life and programming or sometimes mutually exclusive affairs. I believe the trick is in somehow balancing the two. You don't always need both at the same time, but over the longer term you do need a social life more than programming ;)

As for new features that can make ugly workarounds obsolete, that's what we work the hardest on (to give you more time for socialising instead). So whenever you realise that you need to do something in an ugly way, please tell us about it and we will see how this can be improved. And with 'you' I mean all the active Scriptographer users out there.

Apparently I'm just sinking my teeth into scripting when the languages are about to change. Is this planned shift to different UI completely independent from the existing AI package? I want to ensure I'm learning the 'right' language, or if the Adobe CS4 scripting guide I'm muddling through is already outdated (for scripting in CS4 w/Scriptographer or ESTK).

Hello, i think the download links for Windows are all broken :-(

Apologies for the broken Windows links, they are fixed now.

As for changes of the language, there is no need to worry about this as the big change has already happened now, and affected the UI package, not the AI one. There is no sign of the AI package having to change fundamentally any time soon, so it is safe to start learning and using it.

it seems that there is some trouble with Mac OS X 10.6.3, CS4 and Scriptographer 2.8.050. The raster examples don't work. I've tested it with several pictures and vector items, but I didn't get it to work. So I downgraded to 2.7.044 and it worked perfectly.

Thanks for the report - we're working on fixing the bug. In the mean time to get the raster to work change line 30 of Raster.js to: 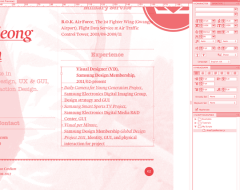 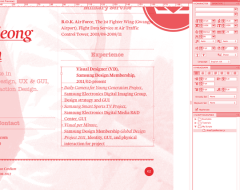